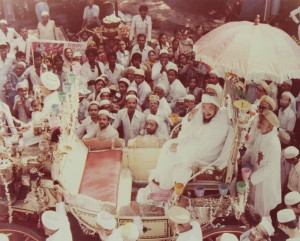 In fact when I had gone there [Darus Sakina] I came to know that His Holiness Khuzaima Bhaisaheb will be there. So when I saw him, I saw it’s not that because you all are knowing him and you were prayerful. What I felt as soon as I saw him.. I was really humbled because of his aura, the divinity which he had. Such people are sent by the Lord himself for the upliftment of people like us. So after seeing him I felt like these are the people who can guide us in this human form of life. We say human form of life is for enjoyment, but no, actually it is an austerity which we all have to carry out and these people have surely carried out. Because of that purity only we are humbled, bow down. It is not some benefits which we should expect from such people. In fact whatever service we can render to these people will be actually blessed and accepted by the Lord. And his son Aziz Bhai, when I saw him he was so much concerned about the library. I was just telling him that library is the most important part, and those scriptures are the basis on which we stand. I really forgot that I had come here to do some business, instead I felt I must really give my heart for the literature which will serve humans and mankind. So I bow down irrespective of the fact that I am a Hindu. And such people are guiding people. I was very joyful after meeting him in spite of the fact that I had travelled a lot that day and had put a word to Shabbir bhai that I may be late. They are so much concerned about us that they gave us tea and water. These people have come only to give and not to expect anything. Hats off to them and I need their blessings. I really pray that such people should live to lead us.

[Mr. Avinash Chavan, who is in the fire extinguisher business, came to Darus Sakina when we were there. He narrated to us his first experience of meeting Mazoon Maula, by whom he was deeply impressed. He even put the glass of sharbat offered to him (it is Mazoon Maula’s custom to offer sharbat to every person who comes to Mazoon Maula’s residence anywhere) to his forehead as a mark of respect.]